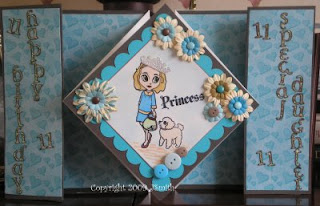 Today my daughter Katie is 11 and we are just sorting out the final bits for her Mamma Mia dance party this afternoon. Just thought I would show you the diamond fold card I made for her birthday. It gets more difficult each year to come up with a different type of design but I thought this fitted the bill quite well (I got the idea from watching a recent C&C pick of the day). Not expensive to make as there are no templates needed, no measuring and only 4 A4 pieces of card to make it. (plus paper for decorating) I am not going into how I made the card as I am not that good at writing the instructions but if anyone does want to know please email me and I will do my best to explain. The stamp design comes from a set by Stamp Addicts. The buttons are papermania and the flowers are papermania and Kaiser Craft. The little girl and the dog have been coloured with Pro Markers and the tiara was dotted with dries clear glue and then sprinkled with holographic glamour dust. The letters have been cut from a Quickutz alphabet and glittered with diamond Stickles but I have forgotten the name of the alphabet! The backing paper used is Papermania and the scallop frame was cut on the Cricut using Strectch your Imagination cart. Hello! I can't believe it's two weeks since my last post. May has just flown for me. It has been extra busy with my daughter doing her SAT's so we can all breath a sigh of relief they are over and it is her birthday tomorrow so we have been busy sorting that out. It also happened to be my Mother-in-laws 80th birthday last week but she spent it in hospital. We took her out for a lovely meal two days before the big day, however on the way out of the restaurant she decided she wanted to get to the car a bit quicker than the rest of us, so she launched herself down the step and broke her hip!
Anyway here is a quick card for you. I don't know who the rubber stamp is by as I got it sometime ago in a grab bag at a show I went to. As far as I can remember it was on Wendy Stenton's stand and that's it. The mermaid has been stamped onto velum using blue Staz-on and coloured on the back with felt pens. I tore the velum and coloured the edges with the Staz on. The background has been coloured with alcohol inks. I have attached a velum panel to the right of the card which has been stamped with a hampton art swirl stamp using green and blue brilliance ink. The shells have been glazed with glitter glue and the card has been finished off with a few strands of white fibres which have been threaded with beads.
Posted by Julie Smith at 16:49 No comments: 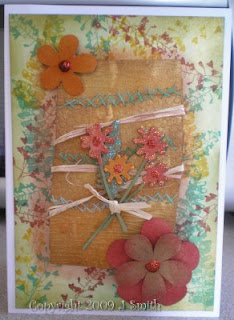 Good evening folks, I have been experimenting with Grunge Paper and Grunge Board for the past few days and have found I really love it. For those that don't know it is like no other card or paper. It almost smells like leather and with some distress ink, glimmer mists and cuttlebug embossing boards applied to it, it looks quite like leather as well! This card started off as just 4 bits of grunge paper stitched together and sort of evolved. The flowers and fern leaf are from the Tim Holtz Nature Grunge Board range and have been coloured with brick red and marmalade distress ink then tied with a piece of rafia. The rafia has also been wrapped around the panel after it had been dabbed with aged mahoganey distress ink The larger flowers at the corners of the panel have been cut from the Grunge Paper on my Cricut using the George Cartridge and then coloured with distress inks as before. All of the flowers have been decorated with candy cane stickles. The grunge paper panel has then been placed onto card that has been sprayed with a light green glimmer mist (forgotten the name again) and a gold glimmer mist. It has then been overstamped with fern stamps from a set by Royal Langnickel using distress inks in aged mahoganey, mustard seed and gamma green brilliance ink. I am not overly pleased with the card as it is a bit busy but I am pleased with the grunge paper as you can stitch it and it doesnt tear at all. 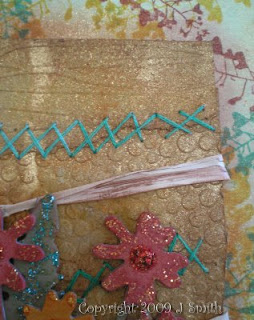 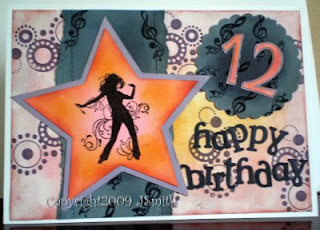 Hi everyone, thanks to everyone who has been dropping by and especially those that have left a comment, it is very much appreciated. I have been having a play with some ideas for our cousin's 12th birthday and thanks to Inkadinkadoo have come up with this creation. Inkadinkadoo have some fabulous stamps sets out at the moment and I love them all. The two sets I have used here are Roulette for the dotty circle background which was stamped using a wine coloured Versa fine inkpad and In The Groove for the singer and the musical notes. The star and numbers have been cut using the George Cartridge on the cricut and inked with distress inks. The singer has been stamped with black Brilliance ink and then clear embossed. The black background has been aged with weathered paint DI and white chalk ink and then faux stitched either side using a Tim Holtz ruler as a guide. The 12 has been mounted onto the same black paper as the star background and was punched using a Woodware scalloped punch. The musical notes were stamped using black pigment ink and then clear embossed. The Happy Birthday was cut using a Quickutz alaphabet (sorry can't remember the name of it) Before sticking the backing paper to the base card I have added the usual distress inks to it. I think the colours I used were milled lavender, worn lipstick, marmalade and mahogany to the edges.
Posted by Julie Smith at 16:21 1 comment: