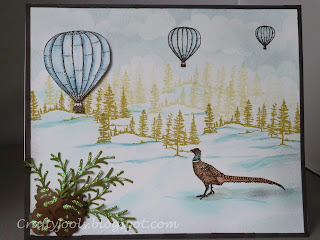 Afternoon bloggers. I have left the Clarity Challenge to the real last minute this month and have hopefully made it by the skin of my teeth. The theme is winter so hopefully that is was the card sort of looks like. As ever all the stamps used are from Clarity but the die cut of the pine cone and leaves are from Joanna Sheen.
I have tried to keep the card really simple. I stamped the pheasant and coloured with water colour, then the fir trees were stamped with moss Versa Fine, followed by the balloons using black Versa Fine. I stamped the largest balloon onto separate paper and cut out so that I could decoupage it with sticky fixers to add a bit of dimension. I used the Clarity cloud mask for the sky and dabbed on two different blue distress inks to create a wintry sky. I watercoloured with the blue distress inks on the balloons and the snow and to finish off added a touch of crystal Stickles to the pine cones and leaves for a bit of sparkle.
Thanks for looking.
Posted by Julie Smith at 12:33 1 comment: 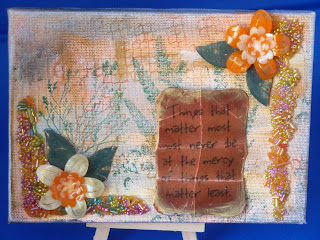 Afternoon all, just thought I would post details of the canvas that I had a go at creating at the weekend. I really didn't have a clue how this was going to turn out so started by just sploshing ink and paint on the canvas until an idea came to me. Next I applied some clear glossy accents to the canvas and covered it with a mixture of seed and bugle beads that I had lying around. Think they were a free gift from a magazine. 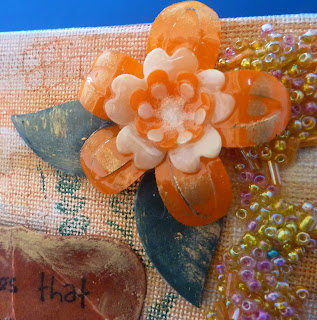 Then I used some die cut flowers that I had already made using a die from the Tattered Lace range. I dipped them into clear UTEE so they have a porcelain appearance. Before I attached them to the canvas I stamped some foliage images using green Staz-on ink onto the canvas (from Chocolate Baroque) just using the rubber image pressed directly onto the canvas without the usual mount. (As the canvas isn't a firm surface it is easier to press the stamp without the mount.) 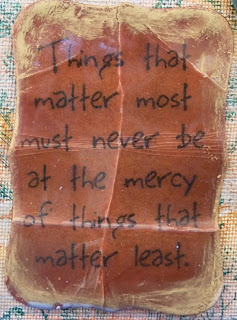 The sentiment is from Chocolate Baroque and I stamped onto a Spell binders die cut, which I then covered in clear utee and then cracked. I added a gold wax to the edges for interest. As the sentiment is not completely flat it has not photographed particularly well, but I am sure you get the idea from the image.